Today marks the final day of 16 Days of Activism for no violence Against Women, and Children.

And advocacy groups say they are still waiting on proactive measures to tackle the scourge.

A series of dialogues with communities and activists has been held across the province during this period.

But NGOs believe that this is not enough.

This morning, members of Rape Crisis will stage a protest outside the Khayelitsha Magistrate’s Court.

They’re angry about the four-year delay in delivering the promised specialised Sexual Offences Court to the area.

“ We need to stress that government and other stakeholders need to implement more proactive measures that will see an end or reduction in the rate of violence against women and children in South Africa. We also need a 365 days strategy”.

Jeanne Bodenstein from Rape Crisis, says everyone should know that violence against women and children is a big problem in the country.

“ It’s not new news that in South Africa there’s high rate of violence against women and children, and especially sexual violence.  We need to make sure that government provide the services that it’s promised and those services rape survivors deserve. A Sexual Offences Court is one of them”.

The City of Cape Town says it’s ready for the festive season, with measures in place to deal with challenges related to Covid-19 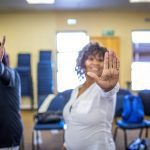 16 Days of Activism – Mosaic, an extensive men and boys programme for perpetrators of gender-based violence