There’s been another urgent call for national government to lift the alcohol ban, to help save jobs here in the Western Cape.

On Monday, the province’s Economic Development MEC David Maynier, also expressed deep concern over how the alcohol ban, beach ban and curfew were causing extreme financial difficulties for businesses in the province.

The Cape’s wine sector alone reportedly employs over 45 000 people, supporting the livelihoods of a further 228 000. 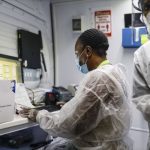