It’s perhaps the king of comfort foods, and a favourite of all ages all over the country – Macaroni and cheese.

Golden and gooey, baked and hearty, this sideline staple or main dish can be served up any number of ways, and on July 14, you’ll have the opportunity to try as many of these as you can on National Mac and Cheese Day, also known as National Macaroni and Cheese Day.

Whether you make it from scratch, mix it from a box, or order it at a restaurant, it’s delicious in all of its forms. A food like that deserves to be celebrated!

No matter what category you fall into, there is no denying that a dish like this deserves its very own day.

There are many different variations of mac & cheese that have been made in recent times. A lot of people prefer the classic version. However, there are many people that have gotten experimental too, using different blends of cheeses and loading up on the seasoning.

Some fascinating facts about Mac & Cheese 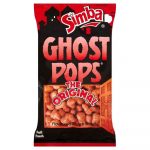 So what happened to Ghost Pops?

The famous childhood favourite chocolate, Chocolate Log will be discontinued