Health authorities in the City of Cape Town are concerned about a looming health crisis at the refugee site in Bellville.

The City says one group is preventing another from using sanitation facilities.

Officials visited the site yesterday in attempts to assess the situation and find solutions.

Among the claims is that about 120 people were locked out of the site.

Badrodien says some people should be resettled in the communities they used to live in, and some should go to other countries.

“ The City of Cape Town is committed to  make sure that we work with all stakeholders in order to return those community spaces back to the communities they come from.  But also to find a sustainable solution for the refugees who are unfortunately one year later still located at these facilities erected by national government.”

It’s grilled cheese day, but what else can we do with it? 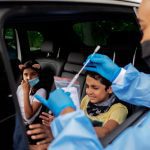 The number of active cases in the Western Cape has remained stable.