A protest movement called Gatvol Capetonian is protesting today. The group of people are protesting for housing and employment.

“We presented to a representative of the city a memorandum demanding that the city give attention to it. One year later, we haven’t heard anything and this is the reason why we are taking to the streets,” Gatvol Capetonian’s spokesperson Fadiel Adams.

“The lockdown restrictions are in place. Gatherings are still prohibited, and public violence is a punishable offense. In the event of transgressions, forces on the ground won’t hesitate to take action,” Potelwa said

Five people have been arrested this morning during the protest. While Mayor Dan Plato has stated that during the lockdown, city authorities have to prevent people from taking land that doesn’t belong to them. 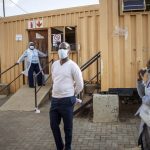 The victim was allegedly assaulted over a number of years, since the age of 14.