The DHL Stormers have teamed up with various artists and local celebrities to record a tribute video of Johnny Clegg’s ‘The Crossing’. Recorded and filmed in their bye week at the beginning of March, the video has been released on the DHL Stormers’ social media channels, including YouTube, Facebook & Instagram and  and can be viewed.

The DHL Stormers squad used ‘The Crossing’ as a team song for the 2020 Vodacom Super Rugby competition, singing it in the changeroom after games before the current season was suspended due to the COVID-19 pandemic.

The song was chosen by team management as Johnny Clegg was a nation-builder who crossed over different communities, much like the Springboks did by winning Rugby World Cup 2019. Their goal in the DHL Stormers’ 2020 Vodacom Super Rugby campaign was to build on that concept of unity and ‘The Crossing’ epitomised that spirit of uniting people and moving forward to a new world.

Johnny Clegg made an important contribution to South African society at a very difficult time and the team were inspired by the collaboration video that was made in late 2018, which saw artists from different backgrounds come together to perform his iconic song. The DHL Stormers are a diverse group of players who work together for their faithful supporters in much the same way.

[Watch behind the scenes]

Given how the song had become such a central part of the team’s 2020 campaign, it was decided – initially as a team-building and life-experience exercise – to try to do a “formal” recording, together with Cape Town-based artists. While the plans were in motion, the momentum grew at a phenomenal pace, with an array of world-class artists taking part, including Francois van Coke, Amy Tjasink, Paxton Fielies, Marc Lottering, Zolani Mohali, James Stewart, Chantal Stanfield, Amy Jones, Chad Saaiman, RJ Benjamin and Heinrich Frans.

DHL Stormers captain Siya Kolisi said that the experience of singing and recording the song had a profound impact on the team.

“Johnny Clegg is an icon of South African music and ‘The Crossing’ is such a powerful song, so it was perfectly suited to our team’s 2020 campaign and even though we only managed to play six games so far this season, we have sung it together after every match.

“To get the chance to collaborate with  well-known South African artists and experience the teamwork that goes into producing a piece of music professionally, was something that we will all remember and cherish for a long time.

“With South Africa currently in lockdown due to COVID-19, the song has even more significance and meaning.

“We hope that this song will help deliver some hope at what is a difficult time for all South Africans and if it does lift the spirits in any way, then the whole project can be considered a major success,” he said.

DHL Stormers Head Coach John Dobson said that the recording took his players out of their comfort zones and gave them an insight into the power that music can have.

Have a listen to the interview with Aden Thomas, RJ Benjamin and Herschel Jantjies. Heart FM was the first radio station to release the song:-

“Singing is a part of rugby at every level of the game and having adopted ‘The Crossing’ as a way of bringing our team closer together, it was wonderful to see the positive impact that this experience has had on our team.

“The hope is that our supporters and South Africans in general will take inspiration from seeing our players alongside some well-known South African artists and celebrities, singing their hearts out.

“The current uncertainty around the COVID-19 pandemic means that this is a daunting time for all of us, but if this song is able to bring us closer together – figuratively of course – then that would be one of our biggest wins this year,” he said.

For Dan Shout, saxophonist and staunch DHL Stormers fan who walked a long road with the late, great musical orator, his leave behind is profound and powerful.

“Having played in Johnny Clegg’s band, for my rugby team to want to do a Johnny Clegg song was just perfect, I think I was definitely the guy for the job!

“For me, the song is extremely apt right now, in that although we are in a difficult period right now, we too shall make our crossing to the next part of our journey after a period of mourning,” he said.

To gain some further insight into the recording of the song and what the DHL Stormers are hoping to achieve, a ‘behind the scenes’ video will be released shortly.

Johnny Clegg’s music has united South Africans and people all over the world for generations and the DHL Stormers would love everyone to stand together with them at this difficult time and make ‘The Crossing’ together.

The police used a water canon on the large group of mostly disabled and elderly people, in efforts to enforce social distancing 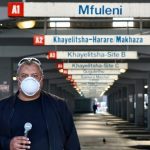 Aden went to the taxi rank during #lockdown 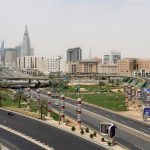