Porterville Youth Taking Matters into Their Own Hands

With only a few days to go until we celebrate Youth Day, Heart FM has passed the halfway mark of its annual 16 Days for Youthinitiative. The core team have made their way to Porterville and Gouda where they are highlighting the stories of those organisations and individuals that are making a difference in the lives of the youth in their respective communities. Yesterday the team broadcast from the “Path of Prosperity” (POP) Centre, located in Porterville.

Historically, farm workers and their families in the wine growing areas of the Western Cape, including the Swartland, have been trapped in poverty for many generations. The effects of poverty are evident everywhere: poor and overcrowded accommodation, illiteracy, high school drop-out rates, alcoholism, domestic violence, sexual abuse, teen pregnancy, unskilled young people and adults, HIV/AIDS, shockingly high rates of TB and some of the highest levels of children born with FASD (Foetal Alcohol Spectrum Disorder) in the world.

These overwhelming challenges result in communities deeply lacking in capacity trapping them in a perpetuating cycle of poverty. While these factors take their toll on all in the community, they have a shattering effect in particular on the quality of life of children.

The POP aims to transform local communities, by offering the next generation of children the opportunity to become healthy, self- confident, educated young people who are eventually able to take up leadership roles in their own communities.

Two such youths areSeroline Pedro (22) and Neheusha Faroo (19). Both young ladies are volunteers at the POP where they work with the kids in the after-school program. But they have taken matters into their own hands and established the Porterville “Jeug’ Forum in order to address issues that affect them and their peers directly.

Recently established, the pair have already attended a critical forum held at the Picketberg community hall, in collaboration with various stakeholders such as municipal council members and Codebridge, an NGO that focuses on empowering the youth through technology.

Pedro and Faroo’s energy are contagious. Both educated, the pair are passionate about the extraordinary level of school drop-outs in their area. Knowing full well what doors can open with and education or vocation/skill. They have identified upliftment as a key strategy to help tackle issues such as truancy, unemployment and crime. They are fully committed to communicating all the ways in which the youth, those who have matriculated as well as those who haven’t, can uplift themselves through taking ownership and getting involved.

Pedro emphasises, “What you become, is up to YOU”. She explains that there are local programs which are available to the youth, but the message doesn’t reach them. The girls are literally going from door to door spreading the word. They are encouraging the youth to be involved by actively participating in community programs and sports activities offered.

Amongst the hive of activity at the POP yesterday, the team spotted a neighbourhood creche across the road and took the time to find out how the facility looked. Upon speaking to the day mother, she shared with the team, the fact that she started renovations but sadly it had to come to an abrupt stop due to lack of finances. It was a no brainer for Heart FM, who immediately made a plan to get the ball rolling again by delivering bricks, cement and various other needed building material.

Funding is a major obstacle that non-registered care facilitie in South Africa face. Coupled with this, there are compliance requirements, which are crucial to the issuing of certificates, therefor allowing for grants. A conundrum for most establishments that are privately run by ordinary members of our communities. 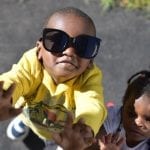 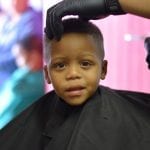 Day 11 at Gouda Educare Centre for 16 Days for Youth