Cape Town Mayor, Dan Plato, has again come out strongly against the ongoing land invasions and violent protests in the Mfuleni area.

Plato is especially upset at the attack on a law enforcement officer.

The community has been protesting over the allocation of houses in the area for more than a week now, and on several occasions the protests became violent.

The officer was assaulted and City vehicles were stoned during the riots.

The protest were sparked by a group of Mfuleni residents who were removed from vacant houses last weekend.

The group says the houses belong to them, but the City says the residents have already been accommodated.

Plato says the officers are responding to eight and more reports of land invasions per day across the Metro.

He added that these actions won’t be tolerated. 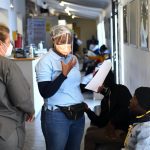