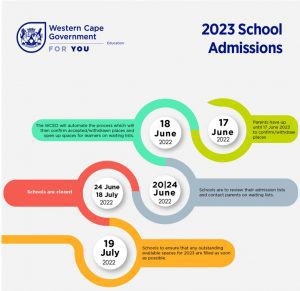 The Western Cape Education Department has updated its admission process – hoping to streamline the process of allocating spaces in schools.

For the past several years, the Department has faced criticism.

Many learners have not been allocated to schools for months after the start of the academic year.

But, from the 18th of June, the admission system will be automated to confirm accepted or withdrawn places to all stakeholders.

However – in order for that to happen – parents need to confirm which schools their children will be attending by this Friday the 17th.

The WCED’s Bronagh Hammond says this will open up spaces for learners on waiting lists:

“The Western Cape Education Department expect thousands of places to become available after 18 during when we automate the admission process for 2023”.

Hammond says that by the time the school holidays have concluded, schools should be booked to capacity.

“Between the 20th and 24th of June 2023 we have appealed to schools to review their admission list and contact parents on waiting lists as a matter of agency. When schools return on the 19th of July schools are to ensure that any outstanding available spaces for 2023 are filled as soon as possible”.