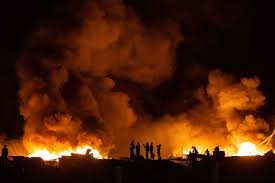 At least eight people have been killed in several fire incidents across Western Cape over the weekend.

Five people including two children died in a fire in Khayelitsha, Cape Town on Sunday.

City firefighters responded to a complaint about a shack alight in the France Informal Settlement, in Site B at around 04h30.

Fire and Rescue spokesperson Jermaine Carelse says upon their arrival, the crews were confronted with a fully engulfed structure.

“As firefighting operations ensued the bodies of three adults; a man, woman and one whose gender is unknown, as well as those of a boy and girl, were discovered. They had succumbed to fatal burn wounds. The fire was extinguished just after 5.20 and the scene was handed over to the South African Police Service just after 6am.

In Rawsonville, near Worcester authorities have launched an investigation into the death of three people in a fire.
Breede Valley firefighters were alerted about a shack fire in Riverbank also on Sunday at around 03h55
Three bodies were discovered in the ashes.

Western Cape police spokesperson Captain FC van Wyk says at this stage, the cause of the fire is still unknown.

“According to reports the dwelling burned down completely. After the fire was extinguished three bodies were discovered. Their identities are unconfirmed at this stage. The owner of the dwelling is presumed to be amongst the deceased. It is unknown how the fire started”.

Rolling blackouts to continue this week