A protest, believed to be over land, erupted again in Dunoon overnight.

The road has since been re-opened.

Police say a truck was ambushed by three suspects, two of them armed, in Dunoon on Thursday before the vehicle was torched.

“No one was injured during this incident,” confirms Sergeant, Rwexana.

The City’s been continuously tearing down shacks built on a sports field in Dunoon near Tableview.

Ground Up reports that last week a prefab mobile structure owned by the local neighbourhood watch was set alight by angry protesters.

Police are said to be investigating the matter.

EDITORIAL: Opposition to Cape Town’s proposed budget is broad, but divided … for now 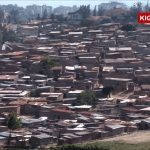