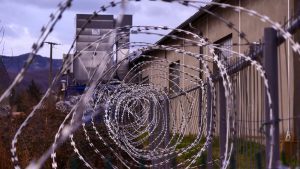 Two of the three inmates that managed to escape the Malmesbury Correctional Facility have been re-arrested.

This comes after the trio executed their prison break last week.

The Department of Correctional Services will not reveal how the inmates managed to escape, as it may pose a security risk.

According to the department’s Logan Maistry, the hunt for the third and final inmate continues.

“The department has since been working around the clock – in conjuction with other law enforcement agencies – to ensure that inmate, Juneal Jacobs, is also arrested.”