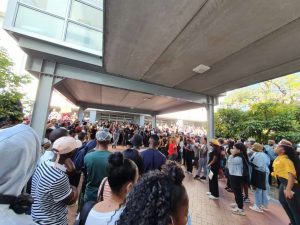 Stellenbosch University has again come under fire for a racially motivated incident on its campus.

The incident took place in the early hours of yesterday morning, at a residence called Huis Marais.

The South African Students’ Congress  (SASCO) alleges that a student broke into the dorm room of a student of colour, and proceeded to urinate on his desk – damaging his belongings.

A video circulating shows a white student doing that.

Maties’ Student Representative Council has confirmed that the case is being investigated by the university’s Equality Unit and Student Discipline structures.

Huis Marais has also since released a statement saying the student has temporarily been removed from the residence.

SASCO’s Queen Majikijela says a demonstration was held in front of Huis Marais.

“The reason as to why the demonstration is taking place is so that we can get answers from the housefather, as well as the house committee of Huis Marais — asking them how they’re going to go about investigating the racist incident that has taken place and whether the safety of the victim is guaranteed, and if the alleged perpetrator is still in the residence.”

The alleged perpetrator has since been suspended from the university.