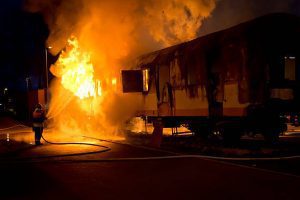 He was sentenced to twenty years in prison in the Bluedowns Magistrate’s Court on Friday.

In March 2020, a train carriage was set alight at Eersterivier Station.

A commuter approached a law enforcement officer and pointed out a suspect.

PRASA made a video of the incident and later it was closely examined, and the same suspect was identified.

During the trial, the court heard that the taxi industry has benefited when trains were suspended.

PRASA national spokesperson, Andiswa Makanda, says this sentence will issue a stern warning to would be arsonists.

“The sentence underscores the seriousness of the burning of public assets and hopes that we can start seeing a decline in theft and vandalism of our infrastructure. PRASA has always maintained that the attack on its valuable infrastructure is economic sabotage.”

Police on the hunt for drive-by shooter