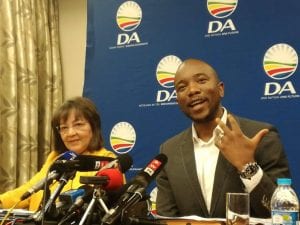 After months of an ugly, public spat between her and the Democratic Alliance, Patricia De Lille has suddenly decided to resign as Mayor of Cape Town.

In turn, the DA has agreed to drop all its disciplinary charges against her.

This agreement, however, won’t see the City’s probe into De Lille fall away.

Her last day in office will be on the 31st of October.

But she will remain a member of the party.

“Our country is facing some massive challenges.

The cost of living is on the increase daily, more and more South Africans are walking our streets without a decent job, and the massive inequalities left by apartheid are still existent in our society today.

What our country needs now more than ever, is for its leaders to put their differences aside and work even harder to address these historical imbalances in our society,” says De Lille.

De Lille was flanked by DA leader, Mmusi Maimane when they addressed the press at a Cape Town hotel on Sunday.

He’s apologised that the De Lille saga has dragged on for so long.

“This is an opportunity for the City of Cape Town DA caucus to take stock, to regroup and to unite. The process to elect a new Mayor will begin immediately, with more details available in due course.

The DA has taken a decision to withdraw all internal disciplinary charges against Patricia de Lille. Any other investigations by the City are not covered by this agreement,” says Maimane.