He’s often been referred to as the “Minister of Twitter”, but on Friday Fikile Mbalula asked South Africans to vote for another party.

Mbalula, who resigned the same day as a member of Parliament, had earlier posted a tweet using the hashtag #RegistertoVoteEFF. 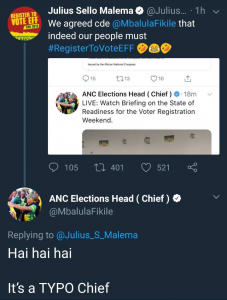 It didn’t take long for Julius Malema to respond, joking that he too agrees with the message.

Mbalula, who’s now the ANC’s Head of Elections quickly answered, claiming it was only a typo.

South Africans can register this weekend at their nearest voting station to take part in next year’s polls.