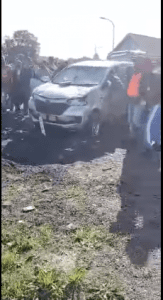 The man who was murdered during an apparent mob justice attack in Parkwood wasn’t a child kidnapper.

On Tuesday three occupants travelling in the area in an Avanza were attacked by angry community members.

Two of them managed to escape – but the other was pulled from the vehicle and beaten up by community members.

They then set the vehicle alight, and pushed his unconscious body into the flames.

The Grassy Park Community Policing Forum says people there are anxious and nervous over rumours of child kidnapping.

A post was circulated on social media about an alleged kidnapping involving a vehicle of the same description.

But the police spokesperson Warrant Officer Joseph Swartbooi says they have no report of any kidnapping in the area at all.

“We can confirm that the incident that occurred in Parkwood, bears no relevance to an incident of kidnapping or attempted kidnapping. The community members were all emotional about fake information being circulated on social media, and partook in this senseless criminal attack. The suspects who fled the scene, are yet to be arrested.

“People need verify reports if they’re fake news or actual news. We do understand that people are afraid of children going missing. But our message is that we need look after our children”.

Taxi fares to go up