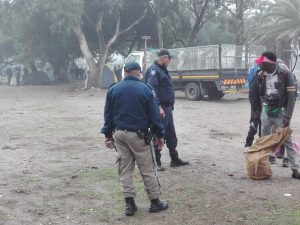 The issue of homelessness – and how the City of Cape Town is responding to it – is the subject of multiple court cases at the moment.

This is the latest matter that advocacy organisation, Ndifuna Ukwazi, is challenging the City on.

They are currently awaiting judgment on that case.

This, and similar legal battles, began with the displacement of Carin Gelderbloem – who’s believed to have lived on Cape Town streets for years.

A City law enforcement officer fined Gelderbloem more than R1 000 for “littering and dumping” in 2019, while she was moving her belongings.

As a result, Jonty Cogger, of Ndifuna Ukwazi’s Law Centre, says Gelderbloem and 10 others challenged the City’s Streets and Waste Management by-laws in court.

While the Gelderbloem case has been pending in the High Court, City of Cape Town Law Enforcement operations continue.

In late 2019, residents of the Singabalapha informal settlement in Observatory were evicted from a vacant building they were occupying.

The residents then built tents and structures in front of the building.

In August last year, City officials evicted 21 people living in tents next to the Green Point Tennis Courts – in an area now known as “Tent City”.

A month later, more than 40 people living in an empty parking lot in District Six were also evicted.

All these matters have been taken to court and, so far, the City hasn’t been having much success defending its actions.

For example, it was ruled that the evictions at the Singabalapha informal settlement, District Six and “Tent City” were all unlawful.

The City has appealed the judgment in each of the cases.

Cogger says Ndifuna Ukwazi has asked the court for an interim interdict to halt all Law Enforcement operations against homeless people, pending the outcome of the Gelderbloem case.