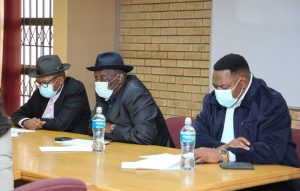 Cape Town Mayor Geordin Hill-Lewis is not backing down from his call for Police Minister Bheki Cele to be fired.

The Mayor first made the call last week, after the release of the country’s quarterly crime statistics.

But Cele, hit back at Hill-Lewis, saying he will not be fired by someone who did not employ him.

Hill-Lewis says the Minister’s response is unfortunate, and lets South Africans down.

He adds that his call for Cele to be removed is not personal, but that things are not working under his leadership.

“It’s time for someone who takes that seriously, who’s a professional and dedicated to take over and to lead the devolution of policing functions down to provinces and cities that are actually able to do it better. We thank those dedicated police officers on the ground. But we do reiterate our call regardless of what Bheki Cele thinks about that, and how rude and insulting he can be in his response that it’s time for him to go”.

Yet another group killing in Khayelitsha