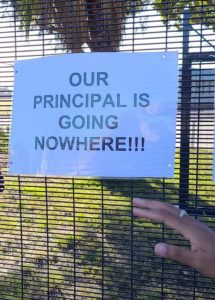 In October last year, he was found guilty of six charges of misconduct — over his refusal to re-open the school during the Covid-19 peak in 2020.

He appealed that decision a month later.

She’s now given him the option to be deployed as Head of Department at one of three Cape Town schools.

He has until this Friday to make a decision.

“The department is a very vindictive department. They’re not a department that will sit down and speak out matters with principles. My advice to him – he’s got the support of the community – is to remain at the school.”

On Monday morning, a large number of pupils, teachers and parents were seen protesting outside the school, against the action taken against Neumann.