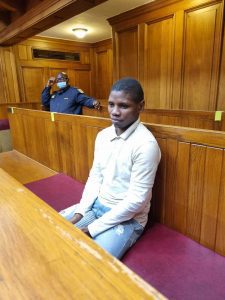 The father convicted for burning his eight-month-old daughter alive has been sentenced to life imprisonment.

The Western Cape High Court on Thursday deemed Vusumuzi Pothelwa a danger to society — who needed to be removed from it.

In November 2019, the man doused his daughter, Khwezi, in paraffin before setting her alight in a communal toilet in Du Noon, Milnerton.

The incident took place after an argument between himself and his girlfriend – who he also assaulted that day.

In addition to life imprisonment, he was sentenced to four years for attempted murder, six months for assault, and a year for arson.

“Pothelwa was convicted for the murder of his child, Khwezi, attempted murder of his girlfriend, assault and arson.   The court handed him various sentences but ordered them to run concurrently, with the sentence imposed for the murder.” – Eric Ntabazalila, National Prosecuting Authority in the Western Cape

The National Prosecuting Authority’s Eric Ntabazalila says it urged families and communities to speak out to avoid incidents of gender-based violence.

Unplaced learners are now in school