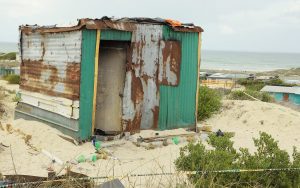 The two people arrested in connection with the murder of five people in Endlovini, Khayelitsha, have abandoned their bail.

Thembani Kobe and Sipho Mgijima appeared in the Khayelitsha Magistrate’s Court, on Wednesday, the 11th of May.

They were arrested in the Eastern Cape and Endlovini this week, bringing the total number of suspects linked to the shooting to three.

Four men and a woman were gunned down in the Endlovini informal settlement in March.

The National Prosecuting Authority’s Eric Ntabazalila says the suspects will be back in court on Friday.

“The State will oppose bail, as Mgijima was arrested in Cala in the Eastern Cape and Kobe has the pending case of illegal possession of a firearm and illegal possession of ammunition against him. The accused are also charged under Schedule 6, and they told the court that they are not applying for bail at this juncture. The case against the two accused was postponed until Friday 13 May 2022, when they will join Madoda Zwayi.”

Mobile classrooms to be installed at a Kraaifontein school