On Tuesday night, Minister of Trade, Industry and Competition, Ebrahim Patel, published a description of what clothing and bedding can be sold under Alert Level 4.

It’s a painstakingly detailed and pernickety list, with so much specificity that we just published it verbatim on our Facebook page.

It gets really granular: you can buy boots and shoes – but only closed-toe ones.

They can be smart or casual, flat or heeled, sneakers or boots – but they must be closed-toe!

If you live in Durban where it’s going to be 26 degrees for most of the next week, sorry for you; no sandals or flip-flops.

You can buy T-shirts, but only to be worn as extra warmth under something else (I’m not making that up).

This level of detail is dangerous, because it leaves no room for interpretation.

It feels like its comprehensive, but it can’t be because no-one should need to be that accurate about the minutiae of retail – least of all the politicians and bureaucrats writing the regulations.

There are 11 different categories of bedding items like comforters, quilts, blankets, throws and duvets – and yet sleeping bags don’t crack the nod.

There’s almost certainly a rational explanation for that, like sleeping bags are for camping, and people must stay at home.

But that’s making the word ‘rational’ do a lot of heavy lifting, when the overall effect of those individual decisions starts to look irrational.

there’s nothing in there to prevent you spending a few grand on some Jimmy Choos for your next Zoom video-conference, for example.

And that perception that Government is becoming irrational is dangerous.

The opposition to the current lockdown restrictions is growing at a fair pace – and, more importantly, its widening.

In it he urges Government to listen to the voices expressing concern about the surrender of human rights.

He quotes Mandela, and then launches straight into a comparison with Apartheid policing behaviour.

The Mandela quote is that profound and iconic call that “never, never and never again shall it be that this beautiful land will again experience the oppression of one by another”

And Manuel straight-out writes that South Africa is back on the list of skunk states where that happens.

The piece is a heavyweight call to action by a political heavyweight.

And, not to denigrate DA leader John Steenhuisen at all – Manuel’s career gravitas, broad-based popularity, and continued activity as an ANC elder statesman make his call more significant than that of the official opposition.

But it adds to that momentum created in Friday’s demand by Steenhuisen that lockdown be lifted.

On Saturday, the only Nobel Prize-winning scientist with South African roots went even further.

Stanford University professor Michael Levitt is a molecular biologist who grew up in Pretoria, and won the Nobel Prize for Chemistry in 2013.

A BizNews.com article describes an interview this weekend where he described lockdown policies as “a huge mistake”, and singled out the countries that locked down earliest as having made the graver error.

In very short order – less than two weeks, I’d hazard – Government will have to make a definitive move that either signals a move toward what Manuel and several others have termed “rationality”.

Or a move to an authoritarian, oppressive enforcement strategy that starts getting termed a regime.

The implicit lack of legitimacy in that word would be politically damaging.

And one of the best bits about the article is a statement that we have another opportunity for a glorious moment akin to 1994.

“I believe we have entered a social compact based on humanity and compassion.”

Which starts talking back to Steenhuisen and others saying Cabinet needs to start seeing citizens as responsible adults.

Social Development MEC, Sharna Fernandez, this week spoke out against new draft regulations on the distribution of food to those in need.

The regulations proposed by the Social Development Minister Lindiwe Zulu, see the distribution of cooked food being banned.

And to rub salt in that wound, NGO’s will be forced to apply for a new permit for any kind feeding scheme.

Fernandez correctly says this will result in closure of neighbourhood feeding schemes.

It’s also another flagrant display that Minister “having a hard time staying at home (even for a rain dance)” during lockdown has completely lost touch with most of South Africa.

Almost anyone else can point out that people struggling to feed themselves face a terrible choice when it comes to affording the means to cook that food – including those with access to electricity.

Again it seems to be a case of Government taking too much responsibility on its own flawed shoulders instead of trusting civil society to assist.

Here’s the danger; the reason these regulations are becoming a health hazard.

The more Government is seen as an over-involved, all-controlling, distrustful parent figure; the higher the chances of widespread self-destructive adolescent rebellion.

Big infection numbers are coming, and – if Government has indeed used the time and resources freed under lockdown to jack up the health system – whether those infections lead to big numbers of deaths will actually be decided on the streets and in the yards, and in the shops.

What needs to happen is that all businesses are given rules on health protocols, and social distancing – and those are policed while the real economy is allowed to stutter on as best it can under those restrictions.

And everyone needs to be brought on board with education drives to persuade them do the handwashing and self-policing that slows the spread.

And the window of opportunity before compliance becomes resistance is closing fast. 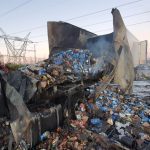 Editorial: The truck strike must be opposed