We do the maths on a possible De Lille breakaway

The Democratic Alliance’s elective conference over the past weekend adopted the so-called recall clause, or as most media call it, “the de Lille clause”.

Basically, if an executive position holder loses an internal motion of no confidence within a DA caucus, there’s a chance for representations to be made to stave off any further action – but in reality, they’ll be given 48 hours to resign, or be kicked out the party.

On air, we’ve regularly discussed that a political party can’t force them out of their position, because technically the entire house – in this case, the Cape Town City Council, voted them in.

So de Lille, for example, was elected mayor with 160 council votes in August 2016 – with a virtual certainty that half those votes were ward candidates, who you and I chose as individuals.

We voted for a party separately.

In terms of the dual-system of representation (direct by ward, and proportional by party), that means a political party cannot “recall” an office-bearer without compromising the power of voters.

So this is the heaviest weapon parties have outside of a Motion of  No Confidence.

Mmusi Maimane says the new provision will only apply from here on out – but, of course, it’s possible to create a new motion around de Lille and initiate the clause against her.

But IF the DA does decide to apply it to de Lille, let’s look at where that takes them.

She’ll be in charge, but party-less. She’ll be – if you like irony – an independent, democratically-elected mayor. What are her options then: does she revive the ID, create a ‘neutral’, new party, or even join the ANC? It seems to me, that the most likely would be a blend: a new party with a coalition agreement with the ANC.

Remember that when her own caucus passed a Motion of  No Confidence in her: 59 DA councillors voted against it – effectively supporting her. Surely, many of those would never actually cross the floor to the ANC … but if they ALL de-camped with her to a neutral party, they’d be a strong party – with 59 (or 60) seats. The ANC has 57 seats – so, together they’d have 116: in a council of 231 members; that’s the magic 50% plus one.

In other words, the DA could lose the City of Cape Town.

The party must be VERY certain that that isn’t a realistic possibility – otherwise, the maths seriously encourages the ANC at national level to potentially bring a heavyweight offer to encourage this outcome; and it must also encourage Patricia de Lille to think along these lines.

All in all – despite this being a purely speculative take on Patricia de Lille’s options – ejecting her from the party is potentially an incredibly dangerous course for the party to follow. 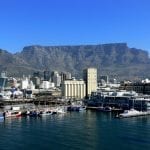