The rising petrol price has been engaging people’s attention. At R15,20 a litre on the coast, it’s never been more expensive to fill your tank.

Worse than that -we’ve heard that the AA thinks we’ll see increases again in July and August – and you’ll have heard finance commentator, David Shapiro, on air talking about how much the price of a potato at your local store depends on the cost of fueling the tractors and trucks required to get it on the shelves.

We’re all taking it as self-evident that it’s going to push inflation and diminish the value of what little is left in our pockets.

I think we deserve an informed and – most importantly – scientifically conducted analysis of that assumption.

Enter Logan Rangasamy – he’s a research scientist at the North-West University’s Potchefstroom Campus, and a deputy general manager in the Research Department of the South African Reserve Bank.

In February last year, he published his research into the impact of petrol prices on inflation in the Journal of Energy in Southern Africa.

Here’s what he found:

Over time, the direct contribution of petrol inflation to headline inflation has not only increased, but has also exceeded its weight in the consumer price index. So this month’s 5.5% increase in the petrol price will push the cost of your grocery trolley up by more than 5.5% over the course of the next few months. It’s fair to assume the impact will be that your basketful of weekly goodies – or your trolley after payday in August or September – will actually cost you 6% or 7% more than it does now.

Rangasamy also says that petrol prices have an important bearing on the prices of other commodities in the economy. Being an academic paper, commodities here are basically the raw materials;  sunflower seeds as opposed to cooking oil.

So .. in short, yes there is a properly researched and scientifically argued opinion within the Reserve Bank itself that says that rising petrol prices cause inflation to rise.

But before you head off to do your Christmas shopping now in a bid to dodge the increases, don’t forget that the oil price has been dropping for the past three weeks, so there’s hope of some relief in later parts of this year. 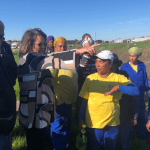