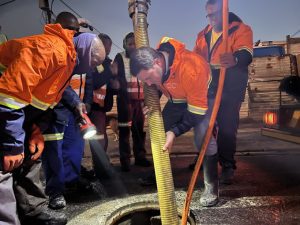 Some opposition parties say the programme doesn’t exist as many homes and roads were badly flooded by last week’s rains.

In May Hill-Lewis , launched the programme, with a project to clear obstacles that cause blockages in the sewer system.

And, over the weekend, his office released a statement saying the City’s flooding and storms task team have been working for months to reduce winter risks.

However – the ANC in the city claims the underground system is collapsing – with no plan in place to fix it.

But the mayor brushed the claim aside.

Hill-Lewis insists there’s been a change in the City’s approach this year.

“This year we have done a 100km of proactive line cleaning, what is great to hear is that areas which last year and previous years have been totally flooded are not this time around, because of cleaning. At the same time residents have a responsibility to help us. All these sorts of water drains are completely clogged with litter and as so every one of us please help us to protect those drains”.

With more rain predicted for this week, Hill-Lewis is reassuring residents that the City is prepared.

Forecasters are only predicting light rain for Wednesday and Thursday – but some parts of the metro remain under water from last week’s storms.

Hill-Lewis says emergency services are on stand-by to respond to requests for help.

“We got huge diesel operating mechanical pumps that pump water. We’ve got crews that manning those pumps literally through the night. Then we also have something called a jet truck which tries to find areas where there are still blocked drains and tries to clear those out”.

“SANTACO is dragging their feet”