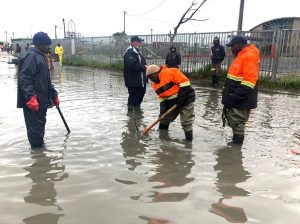 Hundreds of homes have flooded, as extensive rainfall passed through Cape Town these past two days.

More than 200 Khayelitsha households have sought refuge in a nearby community hall, because of their flooded homes.

And the City of Cape Town says all hands are on deck to assist where possible.

Mayor Geordin Hill-Lewis notes that more than a hundred teams from City departments are attending to weather-related issues.

“These teams are stretched extremely thin but every single one, to the last man and woman, are out there working. They will remain working around the clock to help residents as they need them. These teams are obviously prioritising flooded homes first after which they will attend to flooded roads”.

The NGO says it has been inundated with calls over the past 24 hours.

Several volunteers from the organisation have been deployed to various informal settlements across the Metro.

Gift of the Givers project manager, Ali Sablay says they will remain in these areas for the next few days.

“Our teams have been assisting communities in Ravensmead, Langa, Gugulethu, Bishop Lavis, Delft, and Mitchells Plain. We have received calls from Masiphumelele as well.  We have delivered hot nutritious meals and blankets. We are in contact with the Disaster Management Team to see which areas are in critical need”.