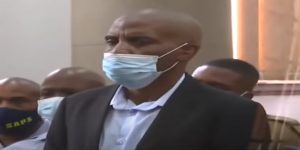 The legal team of alleged parliament arsonist, Zandile Mafe, says there’s a possibility of going to a higher court.

It all depends on the reasons for the judges’ decision.

However, Godla says they may take the matter further if they’re not satisfied with the reasons.

“If you feel that a different court might arrive to a different decision, then you take the matter forward. Upon receiving the reasons, then we will decide which way to go. As things stand, the instruction from my client is that we will appeal – but we still need to look at the reasons and advise him accordingly.”