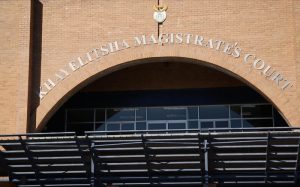 The man linked to the murder of six people in Enkanini, Khayelitsha will return court on Thursday.

Four men and two women aged between 18 and 27 were killed on the 20th of March.

The court is expected to resume with his bail application today.

The National Prosecuting Authority’s Eric Ntabazalila says the application had to be delayed so prosecutors could consider the defence offered by Shuba so far.

“The bail application of Thando Shuba was postponed to Thursday, 21 April for the prosecutor to consult with the Senior Public Prosecutor after viewing the video footage which the accused is using as his alibi. Shuba is charged with six counts of murder after six young people were gunned down in Enkanini”.

Meanwhile, the case against a man linked to the murder of five people in Endlovini, has been postponed until next week.

Madoda Zwayi appeared in the local magistrate’s court on Wednesday, to apply for bail.

But the Magistrate postponed the application until next Tuesday the 26th of April.

In March, five people aged between 25 and 35 were gunned down in the Endlovini informal settlement.

Ntabazalila says they’ve been monitoring this case as well.

“He is charged with five counts of murder following the shooting of five people in Endlovini. His case has been postponed until 26 April 2022 for bail information and verification of an alternative address”.

More than 1 000 errant motorists arrested in a week